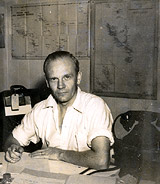 Henry (Harry) Evans Maude (1906-2006) was a civil servant and anthropologist who spent eighteen years working in the Pacific Islands. Between 1929 and 1948 Maude served as District Officer, Native Title Lands Commissioner and Resident Commissioner to the remote Gilbert and Ellice Islands colony, a widespread collection of coral atolls incorporating the Gilbert and Ellice Islands group, the Phoenix Islands group and also Fanning, Washington, Christmas and Ocean Islands. He was awarded the Order of the British Empire in 1939 for his services in the Colony, particularly in relation to his Phoenix Islands resettlement scheme.

Recognising the complexities of island life and the process of cultural change, Maude began to research island history, collecting an extensive array of source materials along the way. The results of much of his research have been published, particularly in the Journal of the Polynesian Society.

The material in this archive has been digitised from the original papers of Henry Maude (MSS 0003) held by Special Collections.

Sub-communities within this community

Part I, Series A: Pitcairn Island
31

Part I, Series B: Holland Papers
7

Papers of F.G.L. Holland, principally re the war-time occupation of Tarawa, Banaban affairs and the post-war administration of Rabi. 1931-49.

Draft text of publications by H.C. Maude on string figures, with related notes, illustrations and correspondence

Papers relating to the establishment and progress of a scheme for settlement of people from the Gilbert and Ellice Islands in the Phoenix Islands. 1936-40.

Part I, Series F: Papers of the Banaban Action V. The Crown
223

Record of proceedings of the court actions brought by the Banaban Council of Elders,

Correspondence with family, friends, colleagues and other researchers, and ‘letters home’ while in the islands. 1929-99

Creation stories, genealogies, myths and legends of the Gilbert Islands, collected by May Pateman of the London Missionary Society on Beru c1926-27

Part I. Series I: Publications
9

Extracts from and photocopies of source materials on the central Pacific generally, particular islands, and island history subjects, with notes and cuttings.